Actress and animal rights activist Anushka Sharma called for ‘harsher laws’ against animal cruelty after news spread of a pregnant wild elephant’s death hours after being fed a pineapple filled with crackers.

Taking to her handle, she shared a screen-shot of the news clip and said, “This is why we need harsher LAWS against animal cruelty!!” 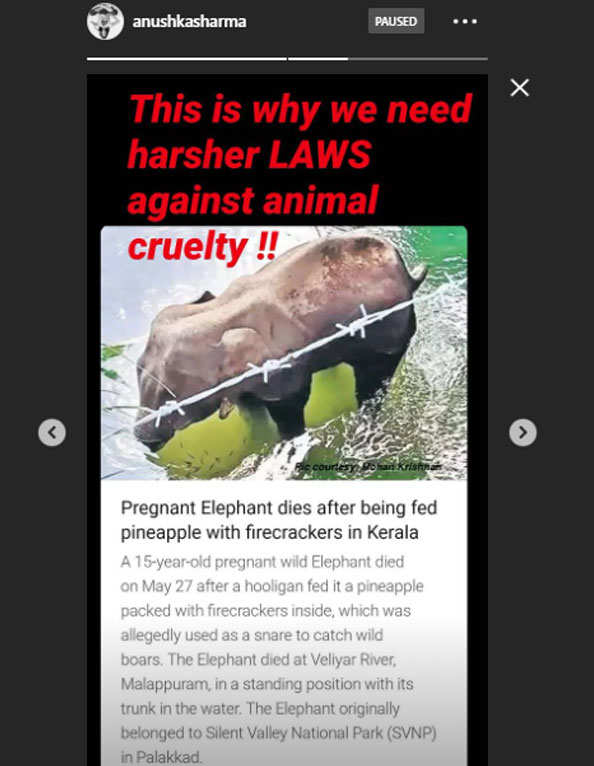 According to reports the female elephant fell victim to an act of human cruelty in Kerala’s Silent Valley Forest after she was fed a pineapple filled with powerful crackers. The fruit reportedly exploded in her mouth, causing her jaw to break and rendering her unable to eat.

The incident was reported from the fringe areas of the Silent Valley in Attappadi.

He said the post-mortem revealed that the elephant was pregnant.

Forest officials are reported hoping to nab the culprit and punish him for his act of cruelty.

The tragic death came to light after Mohan Krishnan, a forest officer, posted an emotional note on his Facebook page, narrating the events that lead to the death of the elephant in the waters of the Velliyar River.

“When we saw her she was standing in the river, with her head dipped in the water. She had a sixth sense that she was going to die. She took the Jalasamadhi in the river in a standing position”, Krishnan wrote in his post.

A few weeks back, Anushka made headlines when she demanded that two teen boys who drowned a dog for a video, were punished aptly for their crime.

Any cookies that may not be particularly necessary for the website to function and is used specifically to collect user personal data via analytics, ads, other embedded contents are termed as non-necessary cookies. It is mandatory to procure user consent prior to running these cookies on your website.