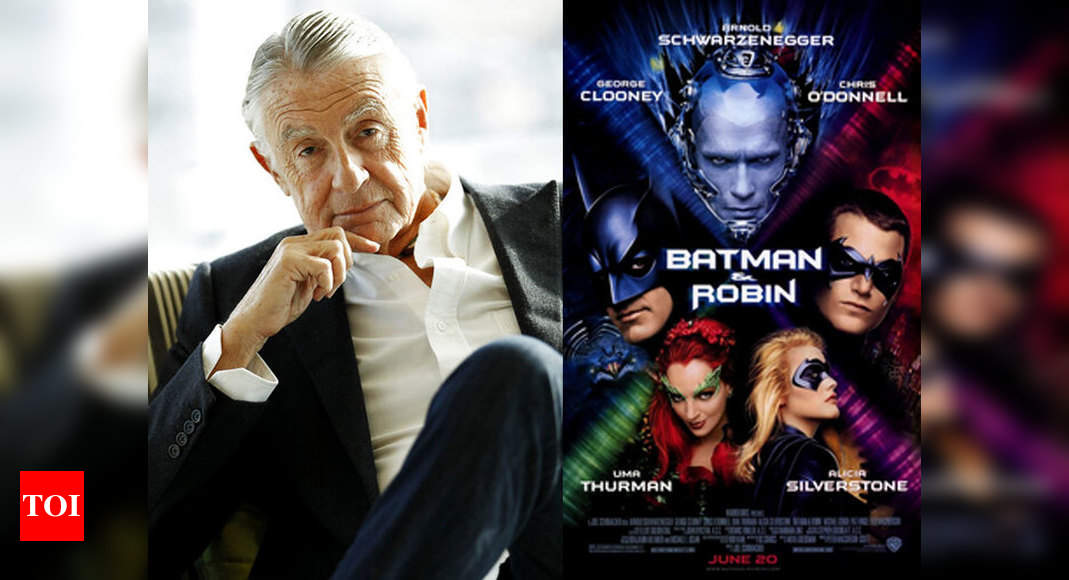 Costume designer-turned director Joel Schumacher, known for helming films including ‘St Elmo’s Fire’, ‘Falling Down‘ as well as two ‘Batman‘ movies, has passed away after a year-long battle with cancer, his publicists said. The native New Yorker passed away on Monday morning. He was 80.

Schumacher started off as a costume designer for 1970s films such as Woody Allen directorials ‘Sleeper’ and ‘Interiors’, along with ‘Blume in Love’, ‘The Prisoner of Second Avenue’ and ‘The Last of Sheila’.

He also was a production designer on the 1974 telefilm ‘Killer Bees’.

Schumacher then turned writer in the late ’70s on ‘Sparkle’, ‘Car Wash’ and film adaptation of Broadway musical ‘The Wiz’, and made his directorial debut in 1981 with sci-fi comedy ‘The Incredible Shrinking Woman’, featuring Lily Tomlin in the lead.

The director, considered as one of the most popular Hollywood storytellers, also has titles such as ‘Flawless’, ‘DC Cab’, ‘The Lost Boys‘, ‘Falling Down’ and John Grisham adaptations ‘The Client’ and ‘A Time to Kill’ to his credit.

From Val Kilmer, George Clooney and Arnold Schwarzenegger in his Batman films, Nicole Kidman and Nicolas Cage in ‘Trespass’, Susan Sarandon in ‘The Client’ to Kiefer Sutherland in ‘The Lost Boys’, Schumacher directed many such Hollywood A-listers.

He is also credited for nurturing rising talent at the time like Matthew McConaughey (‘A Time To Kill’), Colin Farrell (‘Phone The Booth’), Demi Moore and Rob Lowe (‘St Elmo’s Fire’), Gerard Butler (‘Phantom of the Opera’), among others.

Schumacher also directed high-profile music videos including Seal’s chartbuster ‘Kiss from a Rose’ from his ‘Batman Forever’, INXS’ ‘Devil Inside’ and the Smashing Pumpkins’ ‘The End Is the Beginning Is the End,’ which earned him a best director nomination at the 1997 MTV Video Music Awards.

His film ‘Falling Down’, starring Michael Douglas as a frustrated common man who explodes in rage, premiered at Cannes in 1993 and was a Palme d’Or nominee.

‘8MM’, the 1999 film starring Cage, Joaquin Phoenix and James Gandolfini, was up for the Golden Bear at Berlin Film Festival.

Many of Schumacher’s collaborators remembered the one-of-a-kind director as a friend, visionary and someone who launched careers of several Hollywood stars.

McConaughey said he owes his career to the filmmaker, who gave him the lead role as Jake Brigance in courtroom drama ‘A Time to Kill’, at a time when he was “relatively unknown”.

“Joel not only took a chance on me, he fought for me. Knowing the studio might never approve a relatively unknown like myself for the lead in ‘A Time to Kill,’ he set up a secret screen test for me on a Sunday morning in a small unknown studio because as he stated, ‘Even if you do great, you may not get the part, so I don’t want the industry to ever think you screen tested and DID NOT get the job’,” the Oscar winner said.

“I don’t see how my career could have gone to the wonderful places it has if it wasn’t for Joel Schumacher believing in me back then,” he added.

Sutherland took to Twitter to share his condolences to one of his “dearest friends and partners in filmmaking”.

His ‘Lost Boys’ co-star Corey Feldman revealed that the sober Schumacher tried to keep him from doing drugs on the film shoots, firing him and rehiring him after he said he was given cocaine by an adult on the set.

“He tried to prevent my descent,” Feldman wrote.

Lowe said how only the director could see him play the role of Billy, the bad boy in the coming-of-age film ‘St Elmo’s Fire’.

“He had extraordinary taste. The images from his films are timeless snapshots of their era. He was a larger than life original; I will never forget him,” the actor said in a statement to Variety.

Moore said working with Schumacher was a “pivotal moment” in not only her career but also to recovery from drug and alcohol addiction.

“Forever grateful for the tough love and the chance that he took on me. His daring, dynamic spirit will be missed. Rest easy Joel,” she wrote on Instagram alongside a clip from their film “St Elmo’s Fire”.

Cage said he is “very upset” about Schumacher’s death.

“He was a great artist and a true friend… I will miss him,” he added.

‘Batman Forever’ star Jim Carrey gave tributes to Schumacher on Twiter: “He saw deeper things in me than most and he lived a wonderfully creative and heroic life. I am grateful to have had him as a friend.”

Joel Schumacher has passed away. He saw deeper things in me than most and he lived a wonderfully creative and heroi… https://t.co/k63sKq21rO

In a video, Seal said the director transformed his “Kiss From a Rose” from a flop into a hit after he used the song on the soundtrack of ‘Batman Forever’.

The musician, who went on to win three Grammys in 1996 for the song including record of the year, said the track “has pretty much defined my career”.

“The only thing we did was make a decent video for it. He didn’t even charge me, he said he loved the song so much. Subsequently, kids thought I was Batman because the song was so big,” he added.

Patrick Wilson, who starred in ‘The Phantom of the Opera’, said Schumacher “started the careers of many”.

“Too many to name. Such a diverse and fearless resume,” Wilson wrote.

Schumacher also received the Distinguished Collaborator Award from the Costume Designers Guild in 2011 and that same year shared a Daytime Emmy Award nomination for the mental health documentary ‘Half of Us’.