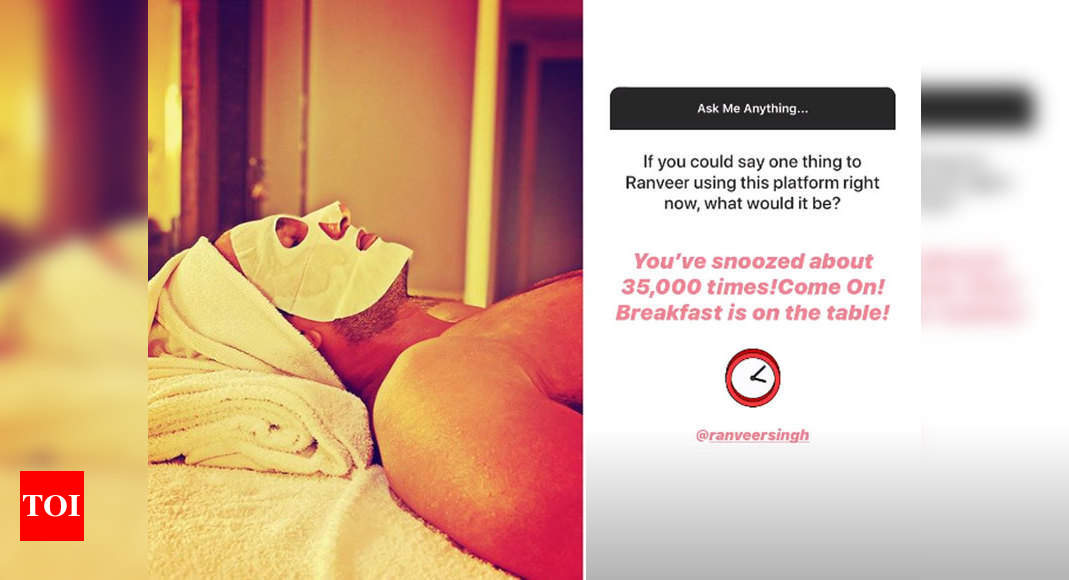 Ranveer Singh may be Bollywood’s live wire out in public, but at home, he seems to be on a snooze fest, according to wife Deepika Padukone.

The actress, who has on multiple occasions shared her amazement about her hubby’s sleeping patterns, was at it again in her ‘Ask Me Anything’ interaction with fans on social media. The beauty was asked for the one thing she would like to tell her husband. Interestingly, it wasn’t something cheeky, naughty or romantic, but rather hilarious.

Scolding her man for his erratic marathon snooze fest, she said, “You’ve snoozed about 35,000 times! Come On! Breakfast is on the table!”

Prior to this, the actress gushed about how “easy” it is to spend the lockdown with her doting hubby as she says he sleeps for about 20 hours a day, which allows her the time to do the things she wants. She went on to add that for the other four hours that the hunk is awake, they are either watching movies or eating or exercising.

Among the many times the actress poked fun at Ranveer’s long sleeping hours, she once had fans laughing out loud when she said that her hubby had ‘Hypersomnia’ – a condition where a person can sleep for 12 to 15 hours but still wake up feeling tired.

Ranveer and Deepika have been spending their leisure time catching up on all the things they love. Once the lockdown is lifted, the two will head back to their packed shooting schedules. The hubby-wife duo are also awaiting the release of their film ’83 that will see Ranveer play the role of cricketer Kapil Dev, while Deepika plays the role of Romi Dev.