Ranveer Singh shares a great bond with Deepika Padukone’s family, especially with her sister Anisha Padukone. Whenever he is at his in-law’s place, the actor is seen hanging out and having fun with his sister-in-law.
Today, on the occasion of his birthday, Anisha took to her social media handle to share a funny birthday post for her ‘Jijaji’ and it is simply unmissable! 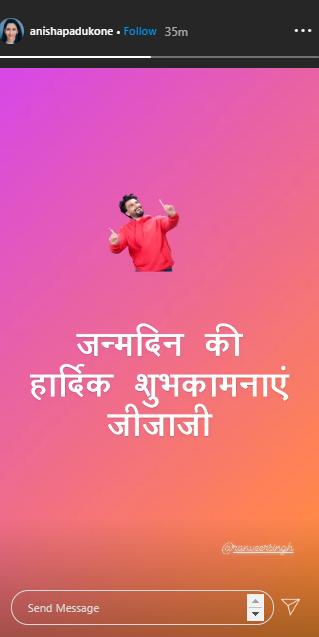 She shared a gif image of the actor where he is seen dancing. Along with the picture, she wrote, ‘Janam Din Ki Hardik Shubhkamnaye Jijaji (Happy birthday, brother-in-law).’

Earlier when the actor had released his gif images on Instagram, Anisha had taken to her picture-sharing app and shared some of his gif images. She also tagged him as, ‘Coolest Jiju Ever’.

Ranveer Singh will be celebrating his 35th birthday today. He is currently self-quarantined at home with his better-half Deepika Padukone. He has been at home ever since the first lockdown was announced in March. Apart from spending quality time with his wifey, Ranveer is often seen interacting with his fans and entertaining them through his social media posts.

Meanwhile, on the work front, his most-awaited movie, ‘’83’ will now reportedly have a Christmas release. He will be seen essaying the character of Indian cricketer Kapil Dev. Apart from that, he will also be seen in Karan Johar’s magnum opus, ‘Takht’.