It has been 14 glorious years since Rohit Shetty’s ‘Golmaal: Fun Unlimited’ was released. The Ajay Devgn, Sharman Joshi, Arshad Warsi, and Tusshar Kapoor starrer became a huge hit. Although Shreyas Talpade replaced Sharman in the latter Instalments of the movie, fans still love their first ‘Laxman’ in the first part of the Golmaal series.
In an exclusive interview with ETimes, Sharman Joshi opened up about all the love he has been getting for the film, his memories shooting for the movie, and his desire to work with the cast once again. Excerpts…

‘Golmaal’ completes 14 glorious years today. How does it feel?
It is really wonderful. ‘Golmaal’ turned out to be a very special film. When we were shooting for the movie, we were all very happy and excited. We did not realise the kind of love we will get for it and are still getting. It is really heartening.

How has been your experience being a part of the first film of the popular franchise?
I was really excited to be a part of this film. This was my first opportunity to work with Ajay Devgn sir. I remember the first meeting that we had. We had reached a day or two before the shoot. The entire cast had met at a given place for a reading. Ajay Devgn arrived and I was so enamoured that I was just staring at him. I also realised that I had to snap out of this zone to work with him. He was very friendly and easy-going. He looked like a quiet-kind-of-guy and so am I. I had a great time working with everybody. I made friends with Arshad Warsi and Tusshar Kapoor also. Rimi Sen was a notorious one on the set. She was the prankster amongst us. It was a long schedule and on the go so we spent a lot of time together and had great fun. 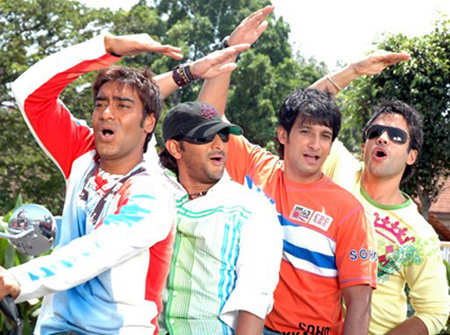 How did you come on board for ‘Golmaal’?
I come from Gujarati theatre and this film was based on a Gujarati play. Neeraj Vohra recommended my name to Rohit Shetty and that is how I came aboard.

How was it working with Rohit Shetty?
I had a great experience working with Rohit Shetty. He knew what he wanted and we were always on the go. I remember, on the first day, the first shot we gave, we were running from our house in the film to the house next door and while we were running I was communicating with Tusshar Kapoor in sign language. At the end of that shot, Rohit said you both are going to make this particular structure that we have made work and aap log ye picture hit karne wale ho. Although I don’t remember his exact words, it was to this effect that we have something good going on over here. All four of us were there in the scene. In the first scene of the film, only Rohit knew that he had a winner on hand.

What kind of reaction did you receive from your fans after the film released?
My fans adored the film. I remember, Ajay Devgn came to me and told me during the dubbing that he had seen the film a couple of days ago and it looked like it was working well. I was very excited there only. I didn’t see the whole film at the premiere, I saw it the next day with my family. However, at the day of the premiere, I was there for an hour or so and the audiences were laughing their lungs out. I left with the satisfaction that people are enjoying.

Any reason you were not a part of other instalments of the ‘Golmaal’ franchise?
There was some miscommunication with the producers and it didn’t work out. However, I will be happy to work with the cast again in the future whenever an opportunity arises

How have you been holding up in the pandemic?
I am doing alright. I am getting along well. Now, there is news of shootings resuming. TV people have already started shooting and film people are also likely to shoot by September. I am looking forward to that. It has been a long holiday. Things do still not seem to be under control but god willing everything will fall into place in the coming times.

You Don’t Really Own the Digital Movies You Buy