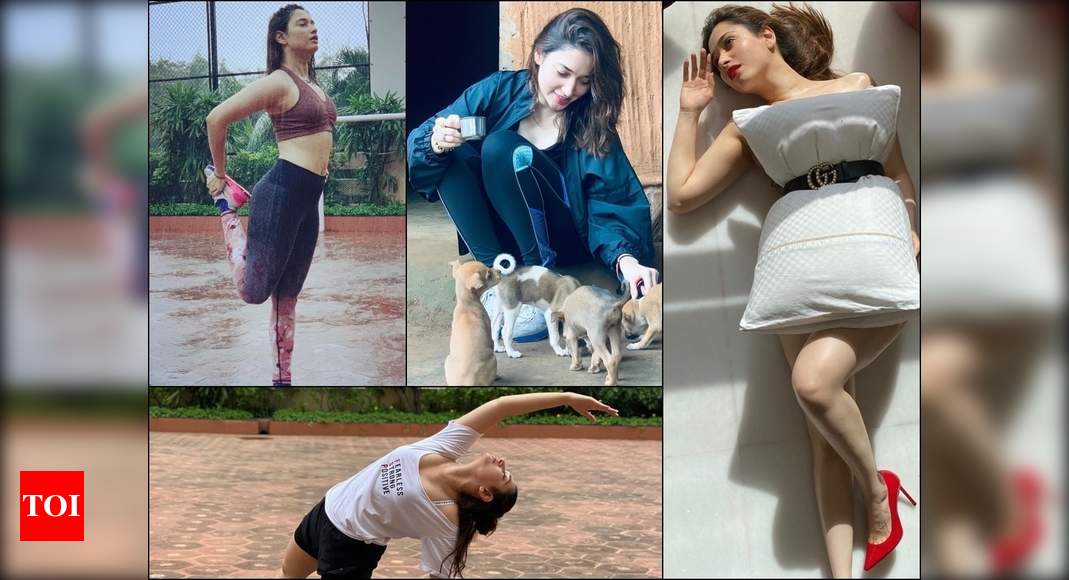 Like many celebrities, pan-Indian actress Tamannaah Bhatia is making good use of her quarantine by spending some quality time with her parents at her Mumbai residence. She has been decluttering her living space, trying her hands at cooking, pulling off complex yoga asanas and sharing some workout videos with fans on her social media handle. Admitting that she finally got a chance to be at home for so long in the last 15 years, the leggy lass stated that she has begun to miss work after the initial two months of lockdown.

During an interaction with Mumbai Mirror, Tamannaah said that she found solace in scriptures of Bhagavad Gita and Durga. She added “My mother helped me understand them and realise that we need to go back to our roots. I have changed the pace of my life, adopted a minimalistic lifestyle, even changed the way I eat my food. I chew it slowly now. I have also become calmer, don’t feel the need to watch digital content all night and ruin my sleep cycle”.

In the month of April, ‘Quarantine Pillow Challenge’ became a viral trend on social media and the picture format involved female celebs’ taking one or more large pillows and fashioning them into a short dress via a belt around the waist. Tamannaah was among the first Indian actresses to participate in the challenge and in her Instagram pic, she can be seen wearing a white pillow as a dress and accessorising it with a Gucci belt. She captioned the post “I’m off to club bed featuring DJ pillow and MC blanket! 🤩”

On Thursday, the ‘Baahubali’ actress got busy on the photo-sharing platform with two back-to-back posts. While the first one featured a motley of photos where the ravishing beauty can be seen playing with stray puppies, the second post showcased her practising a wide range of Heart Chakra Yoga asanas.

Presently, Tamannaah is playing a Kabaddi coach in Gopichand’s upcoming sports-drama Seetimaar. She is also starring opposite Nawazuddin Siddiqui in the Hindi film Bole Chudiyan. Recently, she was roped in as the leading lady opposite Satyadev Kancharana in the Telugu remake of the Kannada romance Love Mocktail. During a recent interview, the Mumbai bombshell thrashed the rumours of demanding 2.5 crore remuneration to romance Ravi Teja in Trinadha Rao Nakkina’s film.

Tamannaah is one among the fittest actresses in the tinsel town. She never misses out on her workout routine and that’s the reason behind her toned figure and washboard abs. In her below throwback video, the 100% Love actress can be seen pulling off the headstand to perfection in the gym. Sporting a tee and high-waist tights, she gets good help from her trainer to ace the ground pose.

Not many know that the ‘100% Love’ actress has a no lip-lock clause in her contract and she stands on it till date. Opening up on kissing on-screen, she said “I haven’t changed the clause in my contract and I don’t know I have stuck to it since I started my career. I just choose not to kiss on screen and yeah it’s the same, no change at all.”

During the pre-release promotions of Sye Raa, Chiranjeevi heaped praises on Tamannaah and termed her as a role model for modern heroines. “After my titular character, it was Tamannaah’s pivotal role of Lakshmi that created a striking impact with the audience. Her dedication, hard work and punctuality are top-notch and I can proudly say that she’s an inspiration for the present generation heroines.”