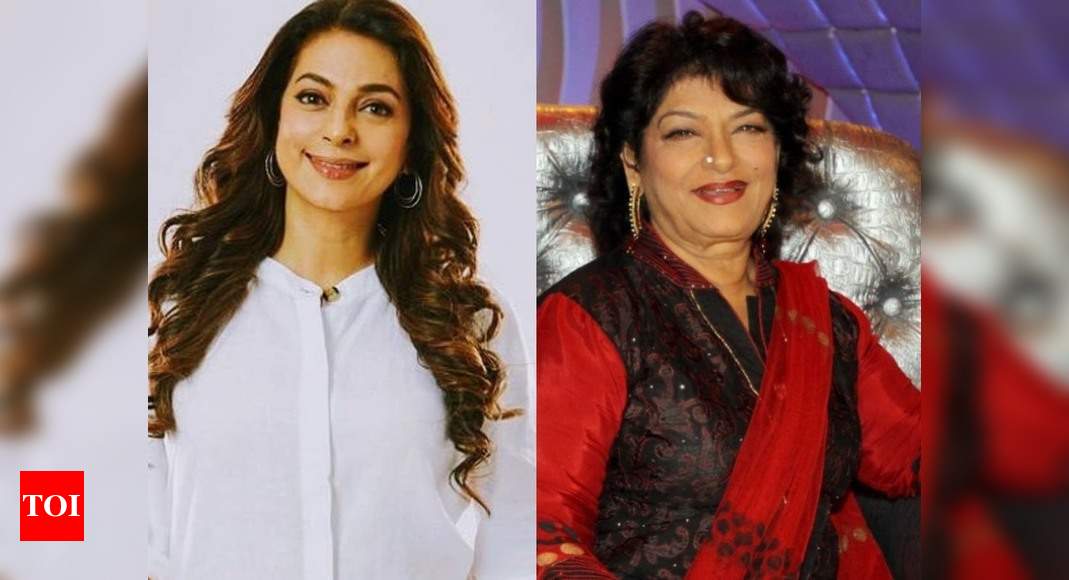 Actress Juhi Chawla is “truly sad” to hear about choreographer Saroj Khan‘s demise. She has shared some fond memories of working with the late legend.

Going down memory lane, Juhi said: “I have many memories of working with her very early on in my career.

“Sarojji was sheer magic, she was head and shoulder above all, she would make her heroines look and perform like queens. Like a lot of choreographers, Sarojji was short, a little plump, not the perfect face or figure but when she would dance you couldn’t take your eyes off her, everybody else around her faded into oblivion. She was mesmerising, she had the finest sense of shot-taking from a direction point of view, her expressions were fantastic – whether it was naughty, seductive, sad, fun or whatever. Her sensibility in every department was top notch. There was finesse in her every shot, she had a fine sense of humour, she was superlative, she was iconic,” she added.

Juhi was called to do a guest appearance for Sridevi-starrer ‘Chandni’.

“I remember doing a look test beforehand, and then I had to face the camera for the first time in Chandivali Studios for the song ‘Lagi aaj sawan’. I was very new, shooting for Yash Chopraji for a film starring big stars and I was going to do the song

mercifully the shots were just me but then it was with the top choreographer of that time, Sarojji!,” she recalled.

Clearly, Juhi, then a budding actress, was nervous.

“I just hoped everything went well. It was an outdoor shoot amongst the greens, Sarojji would show me the shot and the cameras would start rolling. It was probably my fortunate day because every first or second would be okayed. I remember my staff telling me that it’s not easy getting Sarojji to say ‘okay’; if the shot doesn’t go well you don’t get an okay,” said Juhi.

After the 1989 film the actress got to work with her time and again, at several intervals.

“Some of my most famous songs have been choreographed by her. We have the title track for ‘Hum Hai Rahi Pyar Ke’, we did ‘Main koi aisa geet gaoon’ from ‘Yes Boss’, ‘Ishq hua kaise hua’ from ‘Ishq’, ‘Raju Ban Gaya Gentleman’, and so many more,” she saidn

“Right after ‘Qayamat Se Qayamat Tak’, my career had just taken off and I had to do the song ‘Main teri rani, tu raja’ from ‘Lootere’ where I had to wear just a shirt on the beach and I was nervous thinking how it would turn out as it was an entire image makeover for me to go from wearing ghagra choli in QSQT to just a shirt on the beach. Sarojji handled it and when I saw how she shot it and what it turned out like, I was surprised. I looked like a million. She could make magic out of nothing, she could make everything look classy, it was never just a song, it was finesse in the way she made you look and perform, that was her gift,” she added.

Sharing another anecdote, she said: “We were shooting for ‘Karobaar’ in South Africa, Rakesh Roshanji was the director, we were to do this seductive number and again, I was nervous, I cried and insisted that I will only do the song if Sarojji shoots it. Gudduji was very kind, he called up Sarojji and asked her to come. We waited a day for her in Cape Town as she was finishing her prior commitment and then she came and shot the song for us.”

“Sarojji was superbly busy, she would be overloaded with work because she was the best. She would be shooting back-to-back, do 3 shifts in a row, if possible as all the fine people wanted her because her work was fantastic.”

“I knew she would make me do magic, but I questioned myself if I would be able to do that magic. A lot of my songs were also choreographed by Tarun Masterji and Chinni Prakashji, who were from the South and their styles were very different from Sarojji. So when I worked with Sarojji, it would take me a day or two to absorb her style, and by the third or fourth day when I would get her rhythm, the song would get over. I would have to wait another 6 months to work with her and begin the process all over again,” she said.

She thinks the artistes who have totally consumed her were Sridevi and Madhuri Dixit.

“She did so much work with Srideviji, and I was a fan of both, I would listen to Sarojji’s anecdotes about Srideviji, about how she was so shy, but would light up on the screen, she was so amazingly stunning and well put together. I would listen with wide eyes and try to emulate those things because they were both so good at what they did. I remember her telling us how she started into the industry when she was just 12-13 years old how from being an assistant she took over and became who she did. She was simply magic, you can’t explain it, it’s just there in some people, she had it,” said Juhi.

“I was looking at the songs that I had done with her and realised almost the entire team of ‘Chandni’ has passed away. Now I am almost thinking, are they making a film up there without me? They were all such great people with such superb talent,” she said about the film, which starred late actors Sridevi, Rishi Kapoor and Vinod Khanna.