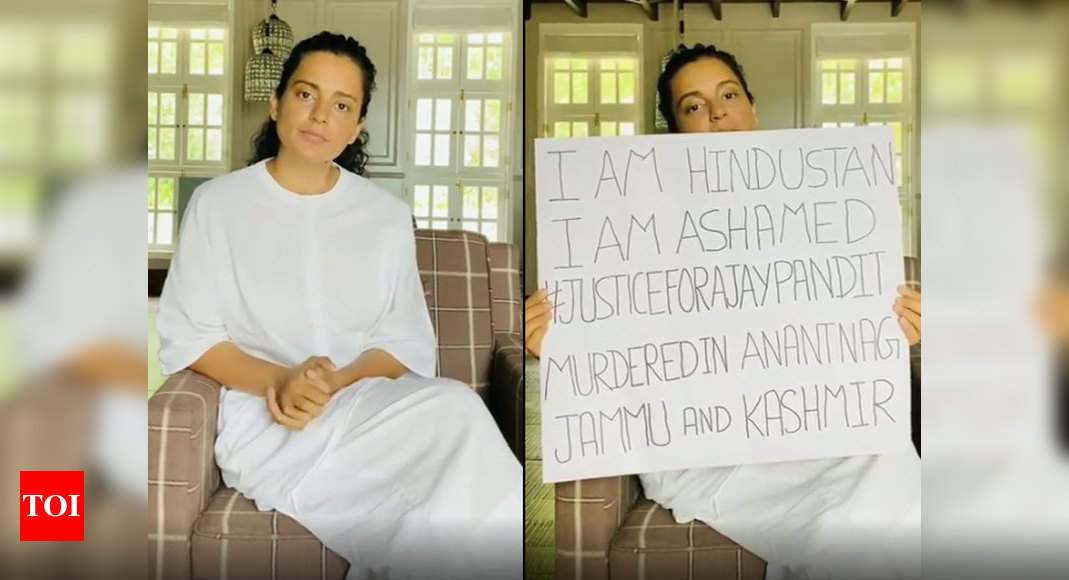 Bollywood actress Kangana Ranaut has expressed her anger over the demise of Ajay Pandita, a Kashmiri Pandit sarpanch, who was shot dead by terrorists in Anantnag on Monday.

In a video shared on her official fan-handle, the actress condemned the attack on the man and the Kashmiri Pandit community. Besides calling out fellow Bollywood stars for being selective about their protests, she also held up a placard that read, “I am Hindustan I am ashamed #JusticeForAjayPandit Murdered in Anantnag Jammu and Kashmir.”

Watch her video below:

Pandita was cremated on Tuesday in the presence of scores of mourners including leaders of the Congress, the BJP and other organisations.

According to reports on PTI, a number of people, who gathered at the Shaktinagar cremation ground for Pandita’s last rites ignored the COVID-19 restrictions and shouted slogans against Pakistan and terror outfit The Resistance Front (TRF).

Ajay, who was a Congress member and sarpanch of the Lukbawan Panchayat halqa in Larkipora area in Anantnag district, was shot dead by terrorists in his native village at around 6 PM on Monday, police had said.

Some members of the Kashmiri Pandit community also protested against the alleged failure of authorities to provide security to the panchayat member despite the threats issued by the terror outfit.

It was reportedly the first such killing of a minority community member in 16 years. Kashmiri Pandit outfits said and alleged that it was an attempt to create a “fear psychosis” among the community members.

In a video posted on Twitter on Tuesday, veteran actor Anupam Kher echoed a similar feeling.

“Deeply saddened & angry at the merciless killing of the lone #KashmiriPandit sarpanch #AjayPandita in Anantnag yesterday. My heartfelt condolences to his family. There is an obvious silence from the usual suspects who cry their heart hoarse otherwise,” Kher said.