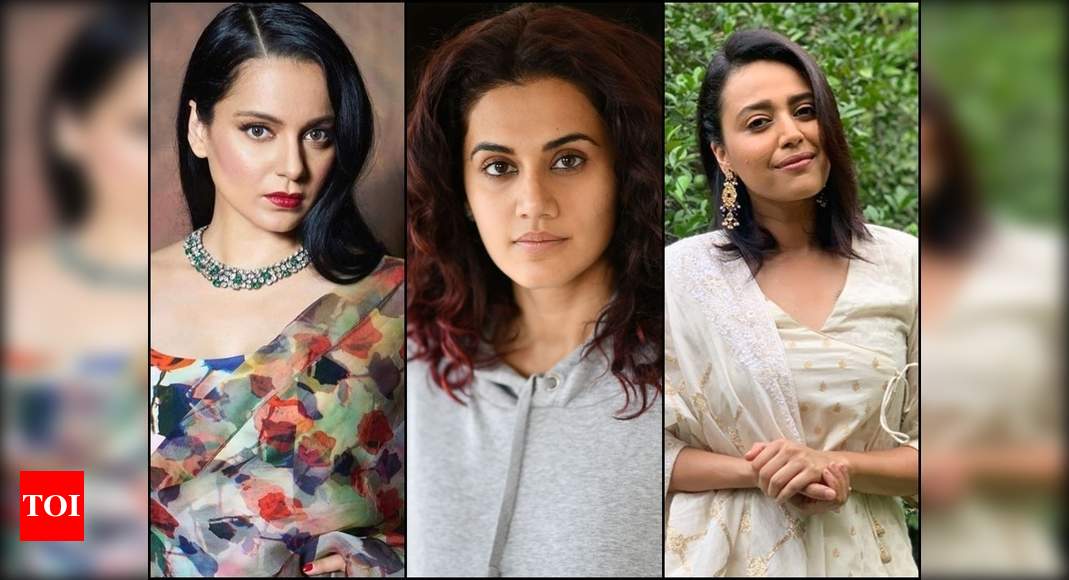 Bollywood actor Sushant Singh Rajput’s untimely demise has sent shockwaves across the nation. Post his demise, the nepotism has been sparked again and netizens have been blaming star kids and celebs like Alia Bhatt, Karan Johar, Sonam Kapoor Ahuja and others for making him felt left out in the industry.

Recently in an interview, Kangana Ranaut exposed the ‘movie mafias’ and ‘nepotism gang’. After calling out Karan, Aditya Chopra, Mahesh Bhatt, Alia Bhatt and others, she also went on to say that Taapsee Pannu and Swara Bhasker are B grade actresses. She questioned why they are still B grade actresses if they love Karan. Kangana even said that both the actresses are better looking and better actresses than Alia and Ananya Panday. Soon after her statements, Taapsee and Swara took to their respective Twitter handles and reacted on Kangana’s remarks. Here’s looking at the timeline of the entire controversy:

Even Swara shared a tweet and reacted on Kangana’s comments. She wrote, ““ -Needy outsider – B grade actress (But) – better looking & better actor than Alia Bhatt & Ananya!” Net net I think this was a compliment! 🙏🏽 Thanks Kangana! I think u are gorgeous, generous & a great actor ! Shine on”

Swara even reacted to Kangana’s ‘needy outsiders’ comment. Slamming the comment, Swara Bhasker had posted on Twitter, “Okay so while on topic.. full disclosure & confession. I am needy. I need respectful public interaction. I need rationality and logic in debate. I need sane, civil and decent public discourse. I need rule of law. and I need FACTS ! What do you need? #NeedyOutsider.”

Taapsee reacted to Kanika Dhillon’s tweet where the latter was all praise for her. Kanika mentioned that Taapsee’s last 5 films made Rs 353 crore at the box office stating her as the highest grossing actress of film industry last year. Reacting to it, Taapsee wrote, “I guess that’s what qualified me for B grade :)”

I guess that’s what qualified me for B grade 🙂 https://t.co/zMGtU7rgR9

Kangana had questioned why B-grade actresses like Taapsee and Swara are not getting work. Replying to the jibe, Taapsee had expressed “I have been doing at least four films per year in the last 3 years now and have five films announced right now. So, who says I don’t get enough work! I decided to keep my career graph slow and steady, and that’s exactly how it’s been going.” Taapsee had also slammed Kangana for taking advantage of Sushant’s death for personal vendetta. She had said, “I refuse to be bitter. I refuse to take advantage of someone’s death for personal vendetta and I refuse to make a mockery out of the industry that gave me bread and identity. I have had my share of struggles and just because I don’t glorify them or deal with them with a positive outlook doesn’t make me any less of the outsider.”

Recently, Kangana even said that actors like Taapsee, Richa Chadha and Swara are never seen in her support as they have ‘bills to pay’. Commenting on the same, Taapsee tagged Richa and Swara, and wrote, “Hi @RichaChadha @ReallySwara someone is really concernedabout our bills n our EMIs. Such a kind compassionate industry. So much respect for our ‘B grade’ struggle.”

Hi @RichaChadha @ReallySwara someone is really concerned about our bills n our EMIs. Such a kind compassionate ind… https://t.co/LUNrEqAObh

Replying to Taapsee’s tweet, Swara wrote, “I’m managing everything by selling my needy soul.. except my pet food.. pls someone pls contribute?”

I’m managing everything by selling my needy soul.. except my pet food.. pls someone pls contribute? https://t.co/DOFKpDMjHt

Kangana’s team has commented on Taapsee’s films like ‘Mission Mangal’ and ‘Badla’ and has said that her films are male dominated. They even said that Taapsee has never given a solo hit. “MissionM or Badla they are male dominated films, @taapsee never gave a solo hit in her whole life @KanikaDhillon n whole left ecosystem trying to cover up murder of SSR who complained about nepotism n Bullying shame on you all no one defended him but defending his murders now.”

Reacting to this, Taapsee wrote, “There is no film as “solo” film , there is no actor such as “chota mota” actor. A film is a TEAM effort including all departments, all actors. The protagonist in NOTHING without the support of the ‘supporting’ cast. Respect is EARNED not COMMANDED.”