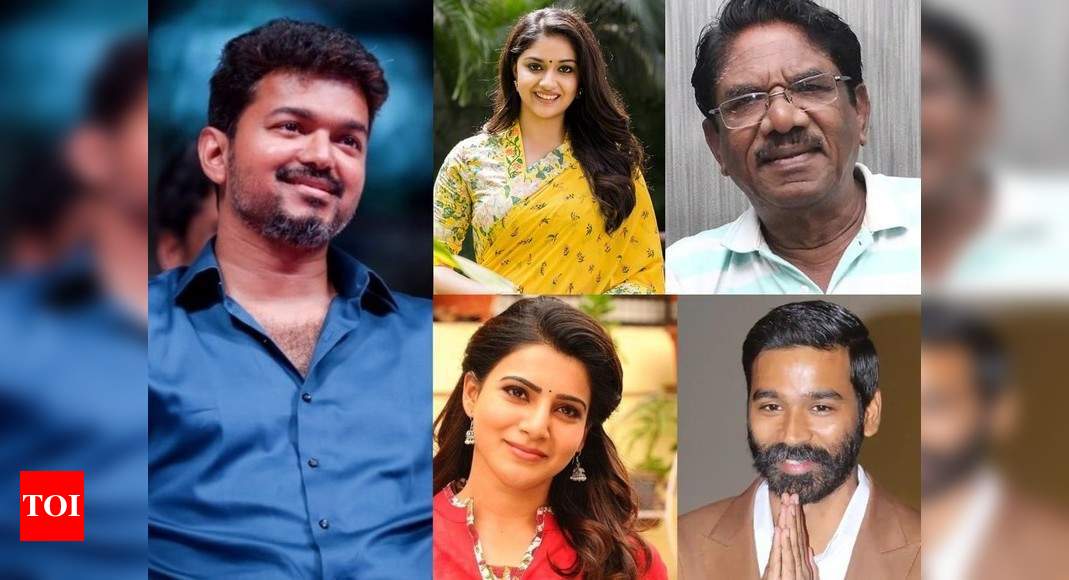 The 46th birthday of Thalapathy Vijay was celebrated yesterday with great zest by fans and friends of the actor despite the restrictions due to the pandemic. Instead of physical celebrations, everyone showered their wishes over Thalapathy on social media. Vijay had also asked his fan club members and people to avoid bigger celebrations and to stay safe from the pandemic. So, fans set a new record by trending the birthday hashtag of the Kollywood star on Twitter. Many celebrities also sent their special wishes for the extraordinary star and turned the birthday into an unforgettable one for Vijay as well as his fans. Here is a look at five wishes sent for Thalapathy Vijay by fellow Kollywood stars from Keerthy Suresh to Samantha which were most loved by fans.

‘Life is very short Nanba, always be happy!’ Happy Birthday @actorvijay Sir! ❤️A small tribute to you on your… https://t.co/5YXApJjZef

The elegant actress Keerthy Suresh has acted opposite Vijay in the films ‘Bairavaa’ and ‘Sarkar’, and she looked like the perfect match for the star. Keerthy Suresh has great respect for Vijay and picks him as her favorite star during her interviews. Yesterday, the talented actress surprised everyone by playing the violin to the rhythm of Vijay’s recent song ‘Kutti Story’ from ‘Master’. This turned out to be one of the top favourite wishes for Vijay this year, and the actress’s new talent was also revealed through it.

Dhanush shares a great friendship with Vijay, and both have been seen together during movie events. Earlier, Dhanush has appeared as a special guest for an event for Vijay’s ‘Mersal’, and has praised the star on stage. Dhanush had called himself a friend of Vijay and talked about the qualities that he likes in Vijay. Calling Vijay a ‘dear’ friend yet again, Dhanush wished Thalapathy on Twitter yesterday, and it was most cherished by fans.

Normally, I tweet as an actor. Today, I tweet purely as a fan… Happy Birthday @actorvijay sir!! … https://t.co/Fpm7B6F6wo

Kalyani Priyadarshan, the daughter of the ace director Priyadarshan, recently made her debut in Tamil with Sivakarthikeyan’s ‘Hero’. The young actress who normally tweets as an actress turned fan to wish the star on his special day. This tweet of Kalyani Priyadarshan gained attention from many, and fans praised the actress for being so humble and honest.

Bharathi Raja on not working with Vijay

Bharathi Raja expressed in his birthday message for Vijay that he was disappointed that he had missed out on working with Vijay. He also praised the actor for developing himself as a lead star in the industry. Bharathi Raja praised Vijay for his good skills, and earning fans all over the world. The senior director’s message to Vijay gained lot of attention on social media. This was because many were puzzled during which film did Bharathi Raja just missed working with Vijay.

Happy birthday dear @actorvijay .. may you always set the bar so ridiculously high with every film that we can’t h… https://t.co/4BIqQLp4yx

Samantha paired up with Vijay for the film ‘Kaththi’, ‘Theri’, and ‘Mersal’, and the lucky pair was well received by fans. All their combinations worked well, and films turned out as blockbuster hits at the box office every time. Samantha wished Vijay by praising the success of his films and said that she felt proud as a fan. Fans were very much pleased with the actress’ wish, and several people expressed their wish to see the actress pair up with Vijay again.