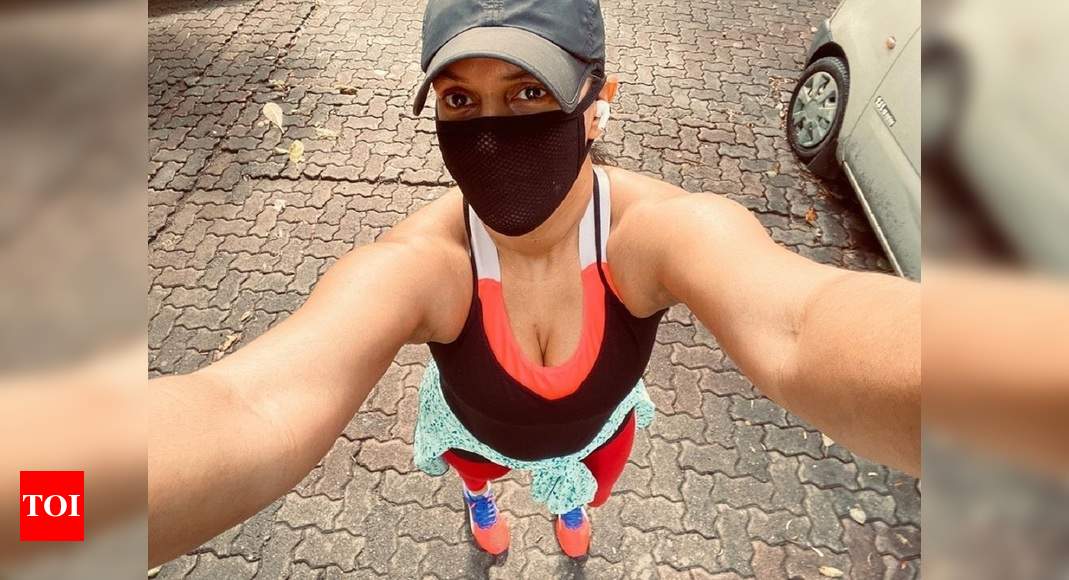 Amid the nationwide lockdown due to deadly coronavirus pandemic, Neha Dhupia is spending her quality time with her husband Angad Bedi and daughter Mehr. Now, after several months, the government has unlocked the lockdown with precautions.

Earlier today after 80 days, Neha stepped out of her house for a morning walk. Taking to Instagram, the actress shared a series of pictures where she can be seen in her gym attire and also sporting a face mask to follow the guidelines. She revealed that after coming out she is having mixed emotions of freedom and fear.

Along with the photos, she wrote, “Went out for a run this morning after about 80 days… was a mixed bag of emotions somewhere between freedom and fear… freedom because i was outdoors and breathing in clean air and that too of a quality that I had never done in my city before , freedom caus I could feel the little drizzle

on my shoulders as my favourite music played in my ears , freedom because my feet were willing to take me on any route close to home till they got tired and freedom in a strange way because I had a mask

on and kept a safe distance from everyone. I felt free also because after ages I got onto my early morning run route and waved to my usual bhajji wala and fruit wala and acknowledged the usual runners at that time who till date I have never been acquainted to but yes we share the same route and time and we know we exist. I felt free as I splashed thru the puddles and that put a smile on my face … I felt fear caus people were out and still were nt wearing masks , I did remind a few from a distance though , felt fear also because the spirit of mumbai was missing… it did nt feel as safe as it used to, felt fear about things coming back to normal … will they ever ??”.Neha is best known for her role in films such as ‘Singh Is Kinng’, Hindi Medium, ‘Tumhari Sulu’.