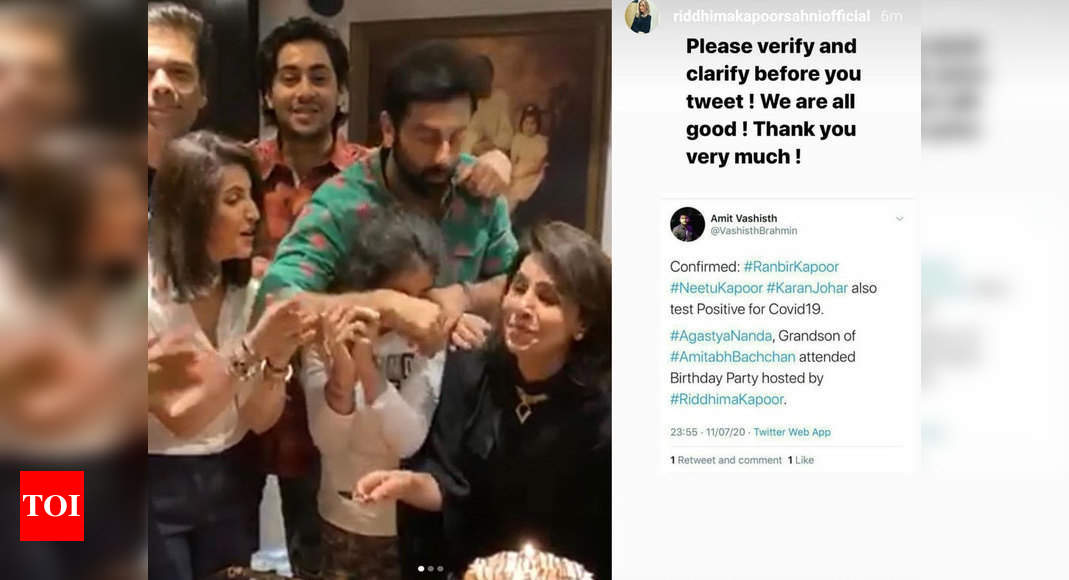 The baseless rumour went viral on and off social media, claiming that the three contracted the virus as Bachchan’s grandson Agastya Nanda had attended Neetu’s birthday party early this week that was hosted by Riddhima.

Shutting down the false report, Riddhima took to her handle and set the record straight saying, “Please verify and clarify before you tweet! We are all good! Thank you very much!”

Sharing the same on her handle, she said, “Attention seeking ??? Least verify/ clarify ! We are fit We are good ! Stop spreading rumours ! #lunatics”

This confirmation comes in shortly after both Amitabh and Abhishek issued statements on their official handles to inform those who were in close proximity with them, to get themselves tested.

“This evening I tested positive for COVID 19 .. have been shifted to Hospital .. authorities informed .. family and staff tested results awaited .. all those that came in close proximity to me in the last 10 days please get yourself tested,” said Amitabh while sharing a photo of himself.

The veteran star has been admitted to Nanavati Hospital in Mumbai where he has been seeking treatment and undergoing tests.

While informing fans that his father and he have “mild symptoms” he asked people not to panic and “stay calm”. Abhishek tweeted, “Earlier today both my father and I tested positive for COVID 19. Both of us having mild symptoms have been admitted to hospital. We have informed all the required authorities and our family and staff are all being tested. I request all to stay calm and not panic. Thank you.”

He went on to add, “The BMC has been in touch and we are complying with them.”

Following the announcement, fans, friends and Bollywood film stars have been offering their prayers and wishing the father-son duo a speedy recovery.

Amitabh has been leading the way in India’s fight against the coronavirus, by appearing in public service advertisements and also doing his bit on a personal level by reaching out to those in need.