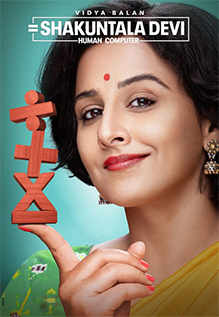 Story: A biographical drama on the life of Shakuntala Devi, the renowned mathematician, whose astounding skills of solving complex math problems in record time won her admiration and awe, the world over.

Review: ‘Shankuntala Devi’ not only explores the mathematician’s fascinating relationship with numbers but her relationships beyond it as well – especially her life as a mother and a woman. If Shankuntala Devi’s intriguing journey which started off as a three-year-old solving difficult math problems and doing her own shows across schools was not remarkable enough – her fearless and independent spirit as a young woman in the 1950’s, who lived by her own rules adds to her dazzling persona. One which she fiercely protects through every stage of her life.‘Why should I be normal, when I can be amazing?’ Shakuntala Devi (Vidya Balan) asks her daughter Anupama (Sanya Malhotra), when during a skirmish the later questions why she can’t be a ‘normal’ mother.

As the film takes us through Shakuntala Devi’s life, it becomes obvious that while her equation with numbers was seamless, her personal equations often ended up being miscalculated. While highlighting her glorious on stage moments during her Maths Shows, it also delves into her string of troubled relationships – with her parents, the over riding anger towards her mother for not standing up to her father when it mattered, the men in her life and finally her strained relationship with her daughter.

The first hour of the film keeps one engaged with a fun, entertaining narrative – where in 1950s London, we see an eager and endearing Shakuntala Devi giving it her all and trying to pull off her shows despite all the odds. Her makeover and brushing up of English language skills spearheaded by her Spanish friend Javier (Luca Calvani), sees her undergo a transformation which brings out her vivacious nature. She is soon the toast of parties and a woman who lives her life with abandon. And when love comes in form of Paritosh Banerji (Jisshu Sengupta), she jumps right into the moment, by proposing marriage to him and having a baby soon after. It is when she is finally torn between motherhood and being the woman who she inherently is – a maths whiz, doing shows world over, that she is compelled to make some difficult choices.

Director Anu Menon brings to us the life of a woman whose story is so enthralling that it is hard to look away. However, at times the narrative does seem to be rushed, as though ticking off milestones in Shankuntala Devi’s life, one after the other in quick succession (and to be honest there are so many). Also the tonal shift from breezy to a dramatic and emotional one is a bit uneven at times (writers – Anu Menon, Nayanika Mahtani). The film has been well-shot (Keiko Nakahara) keeping the different periods in mind and Balan’s looks (Costumes – Niharika Bhasin) through the ages blend in well. While the soundtrack (Sachin-Jigar) is peppered with peppy numbers, the one to linger on is the soulful ‘Jhilmil Piya’ (singers – Benny Dayal, Monali Thakur, lyrics – Priya Saraiya).

Vidya Balan gets under the skin of her character and simply aces it in the titular role – she gives an unrestrained performance as Shakuntala Devi from the 1950s to 2000s which is captivating to watch, as every stage of her life unfolds. Jisshu Sengupta as the suave and sensitive Paritosh is a delight to watch and Amit Sadh as Anupama’s supportive husband, Ajay makes an impact even with his limited screen time.Sanya Malhotra as the slightly older Anupama brings in poise to her character, although her teenage act doesn’t quite pass off that easily.

But ultimately ‘Shakuntala Devi’ is a joy to watch simply to soak in the fascinating life and times of the maths whiz – a human computer faster than an actual computer, the free-spirit, who was all that and so much more! Vidya Kasam, don’t give this one a miss.