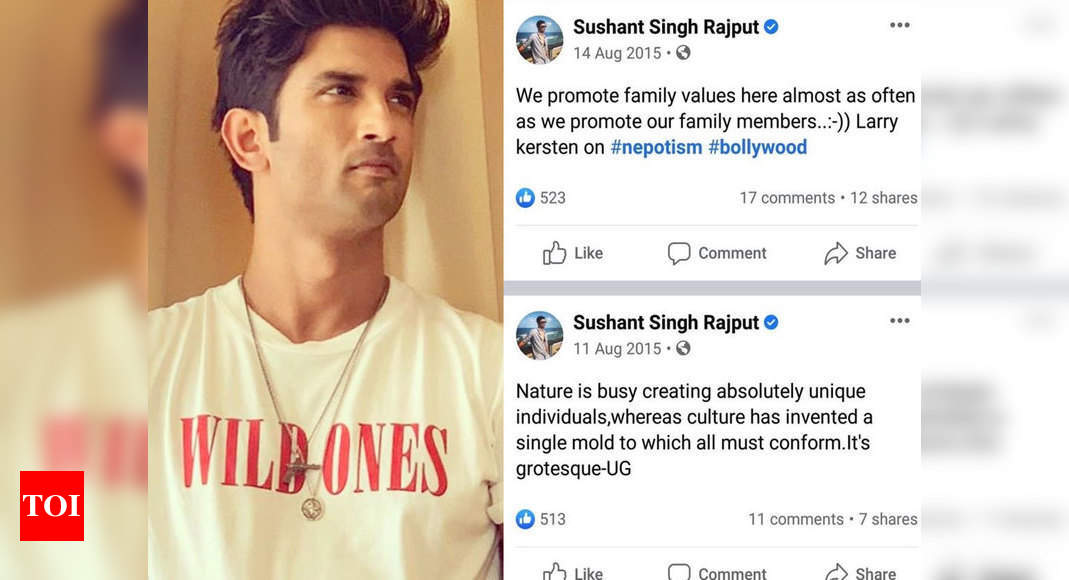 Sushant Singh Rajput’s demise has reopened the ‘nepotism’ debate that made waves in Bollywood when Kangana Ranaut addressed the topic in 2017 on Karan Johar’s chat show.

The actress kicked off a debate and full-fledged discussion when she accused the director of being the “flag-bearer of nepotism.” However, a throwback post on Sushant Singh Rajput’s official Facebook handle, proved that contrary to common belief, it wasn’t Kangana but the late actor who first touched upon the subject.

In the post dated on August 14, 2015, Sushant shared a quote by author Larry Kersten, that read, ‘We promote family values here almost as often as we promote our family members…’

Days before that, he also happened to share another cryptic post that read ‘Nature is busy creating absolutely unique individuals, whereas culture has invented a single mold to which all must conform. It’s grotesque – UG’.

Agony of a genius mind, he decided to watch the circus of Nepotism and be amused by it than fight it, he decided to… https://t.co/EuXA47lhE3

The throwback posts seemed to have caught Kangana’s team’s attention and they posted the same on the Twitter handle Team Kangana Ranaut, saying, “Agony of a genius mind, he decided to watch the circus of Nepotism and be amused by it than fight it, he decided to leave rather than loose himself to an ugly mould people gave him.”

In her exclusive interview with ETimes, Kangana spoke about a conversation she had with Ankita Lokhande about Sushant. She said, “When I spoke to Ankita, she said right from the beginning, there was so much humiliation that he could not take it. This is how she summed it up. She said that I knew this boy since he was working in serials, he became a top actor there, and then he did auditions after auditions, rejections after rejections, and then he got into the big bad world of Bollywood. (Then) every filmmaker wanted this boy from Bihar, they were fighting for his dates and he was so grounded. But one thing that she also said about him was that he was not thick-skinned. He would sit on Twitter when he was new and would fight with fans, asking ‘why did you think that about me? Why did you say that about me? I am not this person that you are saying.’ Ankita told me that she used to tell him ki abhi ye toh hoga na. Everybody will have their perception of you, why are you so bothered about it? He just could not take that, he could not take what people thought about him. She said, over a period, the bad PR, the ganging up, the public humiliation, he just could not take it. He has had enough – that’s what she said.”