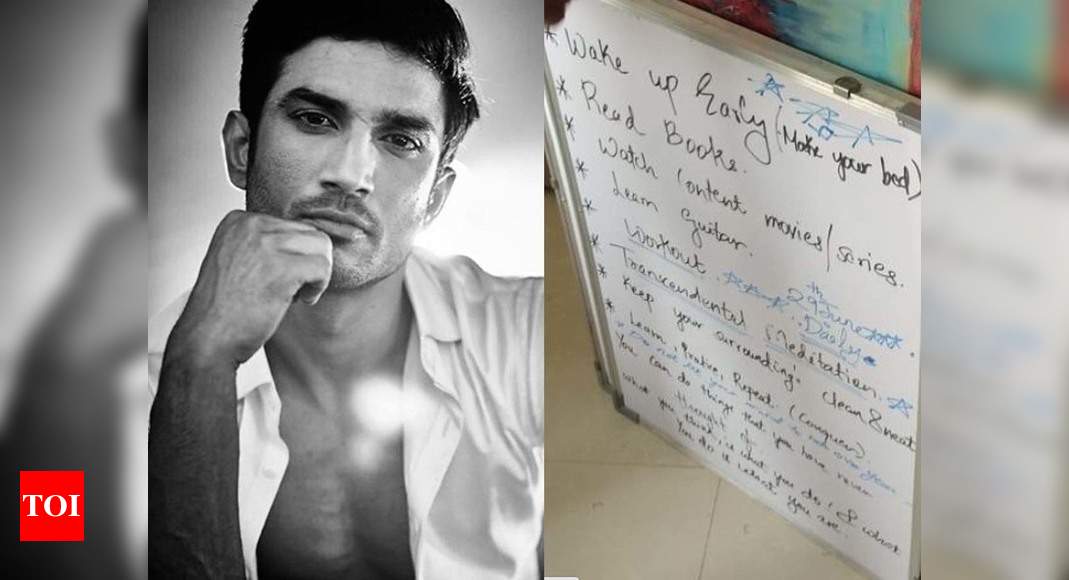 A new post by Shweta Singh Kirti, sister of Sushant Singh Rajput, once again puts a question mark on whether the actor actually committed suicide as his post-mortem has suggested, or was any other foul means involved.

Shweta’s Facebook post on Friday evening shows Sushant was actually planning ahead in life, and had chalked out plans for his daily regime till June 29. He was found hanging at his residence on June 14.

The list includes his plans to practice transcendental meditation daily from June 29.

Other instructions include “make your bed” after waking up, “read books, watch content movies/series, learn guitar and workout” among other things.

“Bhai’s White Board where he was planning to start his workout and transcendental meditation from 29th June daily. So he was planning ahead. #justiceforsushantsinghrajput,” Shweta wrote on Facebook.

Commenting on her post, netizens extended their support to her and prayed for justice to be delivered to the departed soul.

“Shweta ji, Sushant has taught us so much. He is an unforgettable energy. I tell his stories to my kids. He had morals and such infectious positive energy. He is within us. thank you for bringing him to us,” shared a user.

“Sushant never committed suicide or forced to do, He isn’t the kind of men who can take such a mad step, He is a genius, wise, talented, ambitious and real hero. He was murdered, they killed him. It’s a real clear murder, God will help us to get him the justice he deserves, I have a strong faith and let’s continue praying,” commented another user.

“He is such a project manager. writing down everything! such an inspiration. i wish he had taken that Stanford scholarship and just came here!” shared a fan from California.

Earlier in the day, Shweta had shared an adorable video of Sushant where he can be seen singing “Mahadev Shambhu”, a song dedicated to Lord Shiva and playing his guitar.

“I want everyone to pray to Lord Shiva, Let him guide us towards the truth and give us strength to keep fighting. #letspraytogether #SatyamevaJayate #JusticeforSushantSingRajput,” Shweta captioned her video.