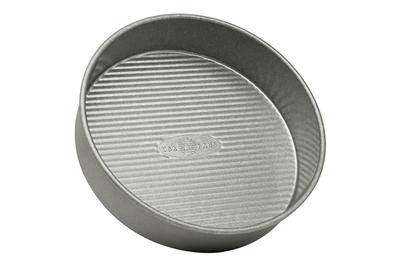 After several hours of research and two rounds of baking in eight different cake pans, we think the USA Pan Aluminized Steel 9×2 Inch Round Layer Cake Pan is the best choice for any baker. It releases cakes effortlessly, and it turns out layers of yellow cake that are evenly browned to just the right golden hue. It’s sturdy, and though its nonstick coating isn’t impenetrable (none are), it holds up well even under a paring knife. And at around $15, it won’t break the bank, even if you buy two or three.

The cake made in the USA Pan Bakeware Aluminized Steel 9×2 Inch Round Cake Pan baked up almost flat on top, popped out effortlessly, and was a beautiful golden brown. Though the four other nonstick pans we tested also released their cakes effortlessly, not all baked such a beautiful cake. Worst was Cuisinart’s Easy Grip Bakeware pan, which produced a dark crust thanks to an exterior coating that is almost black. That pan was also only 1½ inch deep, which could be a problem with recipes slightly larger than the one we tested. On the other end of the height spectrum was Nordic Ware’s Natural Aluminum Nonstick Commercial pan. It baked an evenly golden cake, but it was half an inch taller than any other pan, tall enough to bake the top of the cake darker than any other.

Of the three uncoated pans we tested, some performed better than others, though none as well as the USA pan, or even some of the other nonstick pans. Both the Parrish Magic Line pan and Williams-Sonoma’s Traditional touch pan released the cake in one piece (though a thin layer of cake got left behind in both), but both cakes came out very pale and with a nearly underdone, slightly sunken center. It seems that the uncoated aluminum of both reflects much more heat away from the cake, baking it more slowly. The anodized aluminum Fat Daddio’s pan did a better job of browning the cake, but the cake stuck terribly, leaving a big chunk behind.

The cinnamon roll test was where the USA pan really proved its nonstick power. The rolls left a swirl of sugar residue in all but the USA pan, and though that sugar cleaned off easily from the other nonstick competitors, that still put USA a notch above. The difference, according to the manufacturers, is the pan’s slightly corrugated bottom. Tish Boyle, who uses USA pans regularly, agreed, “The ribbed surface makes a difference.” USA also claims the texture makes the pan more sturdy, but we’ll only know that after long-term testing.

In the scratch test, USA, Williams-Sonoma’s Goldtouch, and Chicago Metallic were the most difficult to damage, though not impenetrable. The Goldtouch, which is ceramic-based and claims to be “more resistant to abrasion than normal nonstick surfaces,” actually felt a little harder than the other two. But scratches were still not deep on the USA pan (which uses a silicone-based coating), and its ridges kept the knife off of half the surface. The uncoated pans weren’t scratch-resistant either, but it shouldn’t affect the lifespan of the pan or cause cakes to stick more.

Overall, USA, Williams-Sonoma Goldtouch, and Chicago Metallic were close in performance, but USA won out for a few reasons. First, we think the corrugation does give it a slight edge in the nonstick department, as demonstrated by the cinnamon roll test. Second, it also comes in an 8-inch or a 10-inch size, whereas the others have only an 8-inch alternative. It’s good to have options, and if you’re a frequent baker you may want more than one size. Finally, it’s affordable. So is the Chicago Metallic pan, but the Williams-Sonoma is not: At nearly $20, it’s a good $5 more expensive (plus shipping) than either of the others. And as it turns out, Williams-Sonoma’s pans are actually made by USA Pan (as Cook’s Illustrated notes), so why splurge when you can get nearly the same thing for significantly less?

One unfortunate inevitability of pans with perfectly straight sides is that they don’t nest inside each other. This can make them a pain to store, because they take up a lot of room, but it’s worth clearing space if you really want to make beautiful layer cakes. If you have a shelf big enough, try storing them on their sides, like books.

And, as with all nonstick pans, you do have to be careful. USA recommends you use only non-metal utensils on it, and never clean it with an abrasive sponge. It’s also not recommended for the dishwasher, but few of these pans are. Still, it’s sturdy enough that it should, with proper treatment, last a long time.

The USA pan is made in America, and comes with a limited lifetime warranty. Rose Levy Beranbaum says it’s her “favorite pan,” and Tish Boyle is also a fan. It’s highly rated on Amazon, with 4.8 out of 5 stars over 4,000 reviews, and it was recommended by Cook’s Illustrated (subscription required). 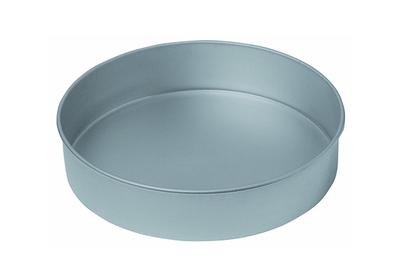 If the USA Pan sells out, the sturdy Chicago Metallic Commercial II Nonstick 9-Inch Round Cake Pan is a good alternative. It baked yellow cake just a hair darker, but not enough to be a dealbreaker. Cakes came out cleanly and the nonstick coating felt durable, but unlike our main pick, it did retain rings of sugar from the cinnamon rolls. It was also recommended to me by Beranbaum. It also comes in an 8-inch size as well as an uncoated version.

If you want lots of size options 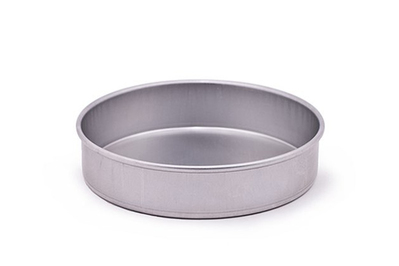 Parrish Magic Line makes pans in every size (the diameter increases by 1-inch increments) between 3 inches and 16 inches, all at low prices.

If you’re an ambitious baker, you may want to tackle tiered cakes, and you’ll need a wider variety of sizes than just 8, 9, and 10 inches (the 1-inch difference won’t make for very pronounced tiers). Or maybe you dream of making enormous cakes, or tiny, 4-inch cakes for two. For that kind of variety, I’d recommend Parrish Magic Line, which makes pans in every size (the diameter increases by 1-inch increments) between 3 inches and 16 inches, at prices low enough that you can afford to expand your options. We saw Magic Line pans recommended many times in forums like Cake Central, and the 9-inch pan is well-reviewed on Amazon with 4.8 stars out of more than 250 reviews. Though we found they baked cakes paler than other pans, this can be remedied by an extra few minutes in the oven. Magic Line pans aren’t completely nonstick, but they do release cakes better than Fat Daddio’s, the only other brand to come in so many sizes. It’s safest to line the pan with parchment, but it’s good to know that im a pinch it should work just fine without.