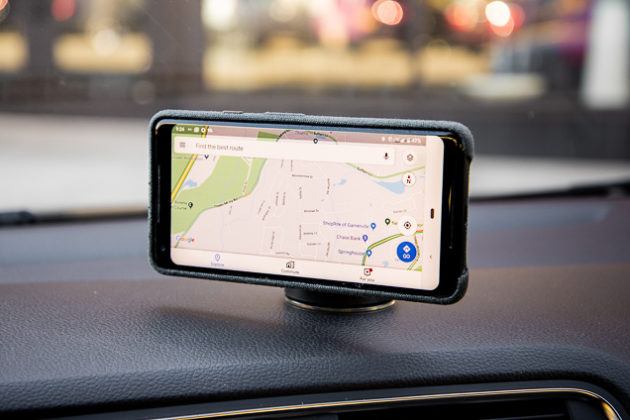 Our previous runner-up pick, the Kenu Airbase Magnetic, worked well in our testing, although a staffer who tested it long-term said that his large 6-inch Pixel 2 XL (in a Google case) would gradually slide off of the mount during extended use.

The magnet on the original iOttie iTap Magnetic Vent Mount couldn’t support our phones as firmly or consistently as the newer iTap Magnetic 2.

The Aukey 360 Degree Rotation Dashboard / Windshield Car Phone Holder has a unique scooped gooseneck connecting the mount to the base. While the plastic itself offers a bit more stability than the extendable necks found on other dash-mounted models, there’s no way to tighten the neck at the base like you can with our previous top, the iOttie Easy One Touch 4, which leads to a bouncier screen. That being said, we did like the silicone padding in the cradle, even if the tension arms were a bit slow to open.

Our previous top pick, the iOttie Easy One Touch 4, has some handy features such as a cradle that automatically closes the tension arms when a phone is pressed against it and a neck that can extend up to eight inches for extra adjustability. It worked well in our testing, although a couple Wirecutter staffers complained that it sometimes allowed the phone to sag downward during long-term testing. We recommend the wireless charging version in our guide to wireless charging phone mounts for cars.

The Vava E-Touch Mount has motorized tension arms that are supposed to open with a tap and close automatically when they sense the phone in the cradle. But it needs to be charged in order to make this work, and there’s no manual override. It didn’t always respond to a touch or to the presence of the phone, and, worse, adjusting the base once triggered the auto-open mechanism, dropping our phone.

We had previously recommended the Ram Twist-Lock Suction Cup Mount, also known as the Ram X-Grip, as well as the Ram Universal X-Grip Large Phone/Phablet Cradle. But, compared with the latest designs, we now find them bulky, and some people have trouble opening the strong, spring-loaded arms.

The Kenu Airframe Magnetic performed similarly to the iOttie iTap Magnetic 2 in our testing. The magnet grip was slightly less reliable, but we still think it’s a good replacement if that pick is not available.

The magnet on the iOttie’s iTap Magnetic Vent Mount was even less reliable, even with mid-sized phones such as the iPhone 7.

The Logitech ZeroTouch is small, sturdy, and reliable enough but offers no adjustability. Unlike any other mount we tested, it does offer Amazon Alexa functionality when used with the ZeroTouch app on an Android phone. We had previously tested this feature but found its appeal limited, especially since you can get the same basic functionality through the Android phone’s Google Assistant.

The vent-mounted Aukey Car Phone Mount is essentially the same as the dash-mounted model that we also dismissed, but it doesn’t suffer from the same stability problems because it doesn’t have the same gooseneck setup. In fact, it performed almost as well as the Kenu Airframe in our tests. We particularly liked the firm grip of the padded tension arms; unfortunately, they also took an annoyingly long time to open. If the Kenu Airframe isn’t available, this is still a good alternative.

The Belkin F7U017bt was generally stable in our testing, and we found it easy to attach and remove our phones. However, you can only rotate the phone between portrait to landscape positions, with no option to tilt it up and back or down and to the sides. It also didn’t connect to the vent slats as well as the Kenu, and whenever we tried to remove our phone, the Belkin tended to come along with it.

We had also previously recommended the iOttie iTap Magnetic as an alternative CD-slot–mounted pick, but the magnets on the newer iTap Magnetic 2 are far superior, especially if you have a larger phone.

The CD-slot–mounted ExoGear ExoMount Touch CD was fine, if a little cumbersome. The tension arms worked well enough, but the knobs and dials could be difficult to adjust, including several times when they spun off entirely.

TechMatte’s MagGrip CD Slot Car Mount was another former top pick, but it was more difficult to install than other CD-slot–mounted models, and a few people report in Amazon reviews that the rubber melted into their CD player, though we didn’t experience that problem ourselves.

We’d noticed that readers seemed to be interested in horizontally-oriented dashboard mounts, so we tested out several models that were either top sellers, or otherwise intriguing. While they were all impressively stable across different dashboards, they each proved difficult to use in their own unique ways. The Loncaster Car Phone Holder was probably the best of the batch we looked at; unfortunately, the lightweight silicone base didn’t support phones very well against the pressure of a tapping finger. If you just want to look at horizontal maps, it could be great, but any other interaction with the phone was basically impossible. The iPow Anti-Slip Silicone Dashboard Pad suffered from a similar problem—although it came with a few custom rubber bracket options that you can adjust to fit different phones, they all turned out to be too wobbly. The Boysnoy Dashboard Car Phone Holder was the only horizontal model we tested where the phone didn’t buckle under the pressure from our fingers. However, it also limits access to the buttons on the side of your phone. What was even more annoying, however, was that the anti-slip rubber mat on the bottom kept getting detached from the rubber base. The adhesive ring remained firmly stuck to the dashboard, but otherwise that floppy rubber mat was barely holding on. We couldn’t recommend something so cheaply constructed.

We also tested the HengBeng Multipurpose Phone Bracket, which is essentially a kickstand for your phone that also (allegedly) fits onto your vent slats. It worked fine as a cheap plastic phone stand. As a car mount, it just kind of left the phone hanging limply from the vent. No thanks.

The Amayga Air Vent Universal Car Phone Bracket has a unique mounting system that’s basically a collapsible bracket that expands and catches your phone like a harness when you place it on the pegs. And it actually works! Except it doesn’t hold the phone very steady, and every time you step on the brake, you keep double-checking to make sure your phone didn’t come flying off the mount. It’s also annoying to have to lift your phone out of the harness afterward when you want to leave the car.

We also tested the cupholder-mounted Weathertech CupFone, which surged to popularity after being advertised during the 2019 Super Bowl. It was stable and had an interesting (if cumbersome) wedging system to adjust the stacking-cup base. But because it sits in the cupholder, you have to look down to see the phone, which takes your eyes off the road for longer than with other types of mounts.