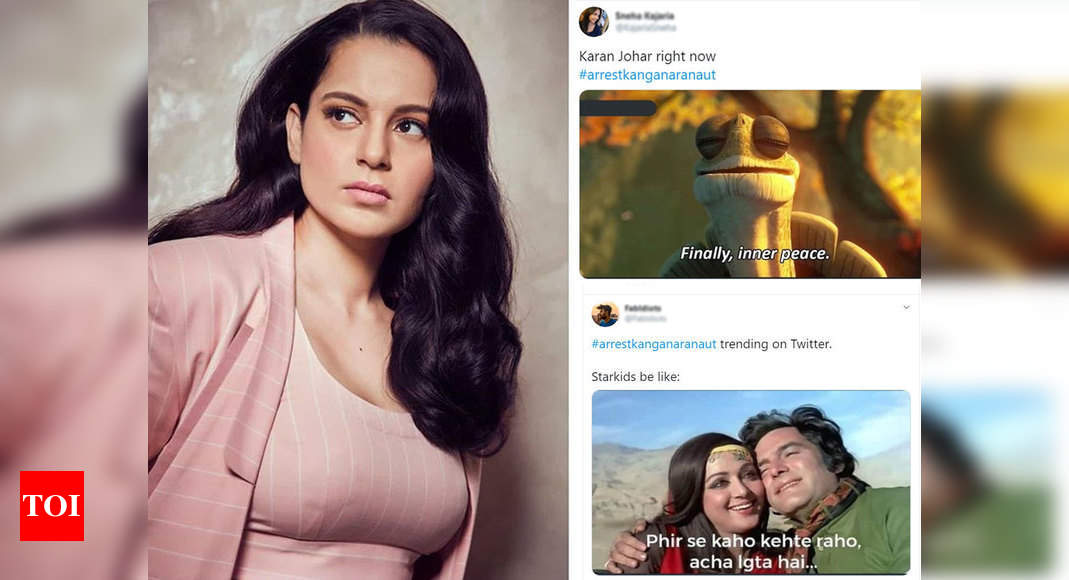 The latest developments in the Sushant Singh Rajput case, with the actor’s father KK Singh filing an FIR against Rhea Chakraborty, accusing her of ‘abetment to suicide’ besides other charges, has prompted fans and netizens to trend #ArrestKanganaRanaut.

Over the course of the past month, Kangana Ranaut has been making many public allegations against various Bollywood stars including Karan Johar, Sanjay Leela Bhansali, Mahesh Bhatt, among others, while claiming that a “gang” drove him to take his life. With the new allegations, Singh made against Chakraborty, netizens began demanding for the arrest of Kangana for “misleading” and “diverting” attention from the real case.

While some slammed the actress for using SSR’s demise to “settle scores” with various Bollywood biggies, there were other meme-makers who made the most of the trending hashtag and had a fired day shearing rather hilarious tweets.

Scroll below to see the memes:

Meanwhile kangana & her team thinking why “#arrestkanganaranaut” is trending. https://t.co/3w0pMYGPSF

#arrestkanganaranaut #CBICrucialForSSRWhen you were Spreading lies & Talking Bullshit in the name of Sushant Singh… https://t.co/5jJdxVWqtW

Meanwhile, there were some loyal fans who stood by the actress and hit back with memes of their own.

With the hashtag taking over the top trends, Team Kangana Ranaut didn’t seem to buckle down but instead said, “come arrest her…”

Finally movie mafia PR has got some budget paid trend #arrestkanganaranaut is being carried out, come arrest her it… https://t.co/hu8zDbHzPV

When criminal cases,death threats, character assassination didn’t stop her #arrestkanganaranaut will only make her… https://t.co/kNILtxz945