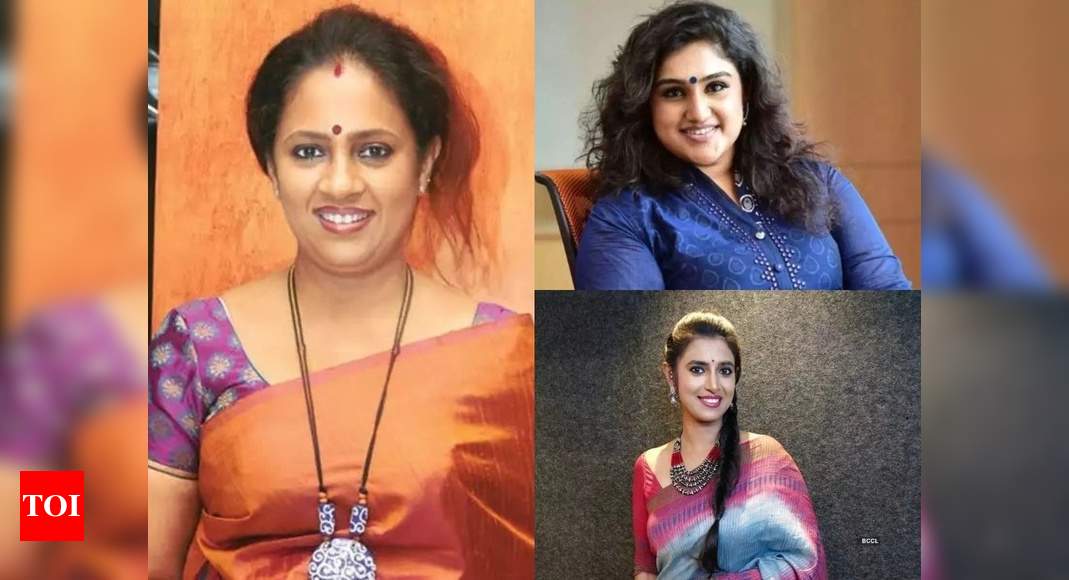 Actress Vanitha Vijayakumar and Peter Paul’s recent wedding has become one of the hot topics in the industry. The actress had recently filed a case against Ravindar Chandrasekaran and Surya Devi, who has been making comments against Vanitha’s personal life. Actress Lakshmy Ramakrishnan had recently shared on her social media page that Peter Paul’s first wife Elizabeth had called her today and spoken to her. Ramakrishnan stated that she had assured her of help to proceed legally, if she required her assistance. The duo then got into war of words on an online platform where the fight got so nasty that it relegated into name-calling.

Actress Kasthuri Shankar, who saw the video, then advised Lakshmy Ramakrishnan to not engage with people like Vanitha. She wrote on her micro-blogging page, “My heart bleeds for you @LakshmyRamki. Please do not engage with cheap kuzhayadi sandai people. @vanithavijayku1 You are really making this so bad for yourself. Take a break. legal standpoint- Hypocrite Vanitha is guilty of cyber abuse , attacking the modesty of a woman, and defamation. She filed police case on surya Devi for abusing her, She has done the exact same offence toward madam Lakshmy Ramakrishnan . She can be arrested.”

Vanitha Vijayakumar then warned both Lakshmy Ramakrishnan and Kasthuri Shankar to not interfere in her life. She wrote on her social media page, “@[email protected] last warning if u try and involve ourselves further in my personal life acting perfect I’ll have to expose your so called perfect lives to the society with evidence. @KasthuriShankar u act as if u were never an actress in the film industry. And u know nothing about life.what gives u the right to appear as a lawyer to a lady u hardly know and create a fake drama on YouTube as if it were a fiction story.u r misusing media for getting publicity using other people’s problems. Just because media carries my news it. Doesn’t give u a right to butt in .u r a loser try to do something in ur life at this stage to be in the limelight using your name not use my shadow…seriously get a life.”

@KasthuriShankar @LakshmyRamki last warning if u try and involve ourselves further in my personal life acting perfe… https://t.co/92x8WGiyyh

Ramakrishnan then went on to say that Vanitha changes husbands like clothes. “Do you understand the meaning, even spelling of ‘Marriage’, ‘Commitment & ‘character’? You dare speak about Dr Ramakrishnan, who is my legally wedded husband for 36 years? People who change, no ‘Keep’ husbands & change them like clothes won’t understand. I sympathise with you:). Do you know what it takes to live as an example to kids? What have you taught your kids about husband and wife relationship? Don’t think others are like you, we, don’t negotiate our self respect for anything in this world. A gutter like you tries to defame me, nothing happens. Let her have 100 husbands also, we don’t care, but it shouldn’t be someone else’s legal husband! That guy should take a legal divorce before he romances in front of camera to irritate legally wedded wife & 2 children. Any disciplined person, man/woman will react to this atrocity.”

Do you understand the meaning, even spelling of ‘Marriage’, ‘Commitment & ‘character’? You dare speak about Dr Ram… https://t.co/e7BjsqvS3b

In the meantime, Kasthuri posted, “But you see, no use talking about my private life since I have only one chapter. It will not bring any benefit to you.. Unlike some mega serial lives with season 1,2, 3…#ChallengeAccepted #BringItOn BTW, what is this actress comment? I didn’t understand.”

Vanitha said that she was blocking Kasthuri on her social media space. “I’m blocking that hilarious fool @KasthuriShankar from my life and Twitter let her keep blabbing..she is capable of only that..comedy piece.”

I’m blocking that hilarious fool @KasthuriShankar from my life and Twitter let her keep blabbing..she is capable of only that..comedy piece

To which Kasthuri replied, “bayanthuttiya kumaru ? Fraidy cat :)) The world now knows who provokes others, and if others hit back, you abuse them & run away. Singapenn Rolling on the floor laughing Please note that till this minute, I have never questioned your personal life choices, But only your cheap PUBLIC actions. Good riddance ! Keep blocking all other remaining good people who dare to question you, and surround urself with crap that keeps cheating you. I actually feel sorry for you. If there is any humanity left in you, I am ready to help even now to find peace and happiness.”

bayanthuttiya kumaru ? Fraidy cat :))The world now knows who provokes others, and if others hit back, you a… https://t.co/MAEOqitOLq

Vanitha said that one could live their life they wanted to. “Divorced twice..I am not degrading my exes and making them face embarrassment for getting fake sympathies …life is a Choice live it or leave it. For all those who think a womans life ends at 40 and having grown children seals this..past is always past..it should never determine your future..and I am not discussing my past and definitely not embarrassing my children of speaking on why and what happened for me to get.”